Studies into the correlates of nonresponse often have to rely on socio-demographic variables to study whether respondents and nonrespondents in surveys differ. Often there is no other information available on sampling frames that researchers can use.

That is unfortunate, for two reasons. First, the variables we are currently using to predict nonrespons, usually explain a very limited amount of variance of survey nonresponse. Therefore, these variables are also not effective correctors for nonresponse. So, socio-demographic variables are not that interesting to have as sampling frame data. See my earlier posts here and here .

It is also unfortunate, because theoretically, we can come up with other respondent characteristics that should explain nonresponse much better. For example, whether respondents believe surveys to be important, whether they enjoy thinking (need for cognition) and whether they have a conscientious personality.

I published a new paper today in Sociological Methods and Research, that links these variables in particular to different patterns of attrition in a longitudinal survey. See the full paper here

Among the 2007 sample members of the Dutch LISS Panel , I tested for different drop out patterns, and classified respondents according to their attrition process. Some respondents are continuous respondents (stayers - on top), while others start enthusiastically, but drop out at various stages of the survey (lines going down), or never really enthusiastically participate (lurkers - erratic lines in the middle). 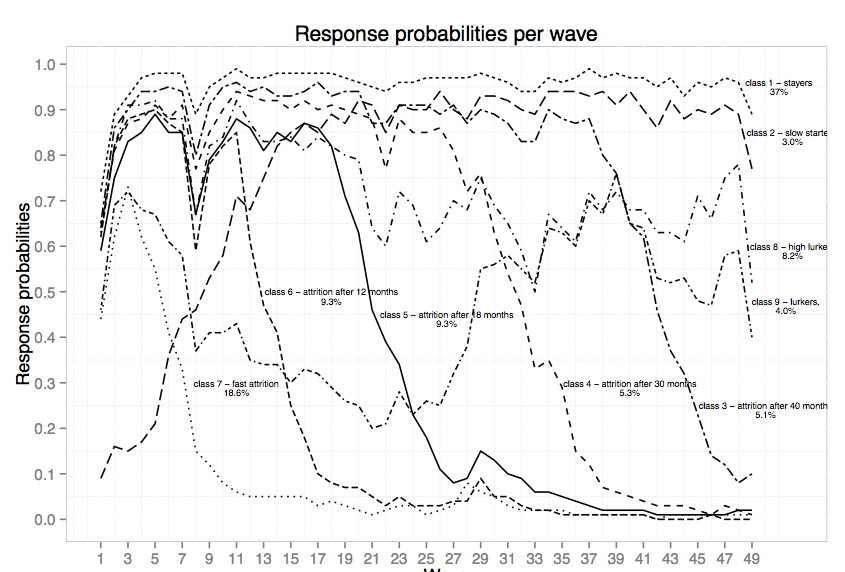 As a next step, I linked the attrition classes to a set of predictors. Among them socio-demographic variables, but also psychological, and survey related ones.

The 3 strongest predictors of the differences between the attrition patterns (latent classes) are:
- Personality. Conscientious and less extravert people drop out less often
- Survey enjoyment. If people enjoy completing surveys, they are not likely to drop out.
- Having received a PC. The LISS panel gave respondents without Internet access a computer and broadband Internet to enable them to participate. Almost none of the people who received such a computer dropped out from the study.

It would be very hard to test my hypothesis that personality is a strong predictor of all types of nonresponse. Unless you would do a survey among employees, and have simultaneous access all personality data from tests that every job applicant at that company took. If you sit on top such data and want me to analyse them, do e-mail me.